So about 12-ish years ago I was hanging around on one of the campuses of the local community college, for reasons I can’t even recall.  Probably I was enrolling in a class?  And this musical group was playing a free noontime concert, and it was so compelling that I sat down and listened to it.  And that was 3 Leg Torso, and it was magical and stuff.

Years later I found a website and downloaded a few songs that were up for free.  And have lovingly loaded them onto each computer and mp3 player and phone that I have ever used.

Last fall they played with Storm Large and it was so fantastic I was practically schvitzing.  It was the first time I’d ever actually seen them since that noontime concert all those years ago.  They did not disappoint.

I got a new job last fall and it has been stressful.  Christmas was all set to whiz past in a blur, and I had a hard time getting into it because I was so busy and stressed.  I had one. single. day. off.

Then The Lovely Rhonda found this:

And we went to see it and Christmas came bizarrely alive.

This year we found ourselves at loose ends for the 4th of July.  Usually we are at family camp at Camp Adams for the 4th, but this year we were home owing to the fact that the 4th fell on Saturday, the day camp was over.  We pawned the children off on their other households under the guise of “since we’ve hogged it these past five years you can have a turn, you’re welcome” and savored the idea of a leisurely day of holiday barbecues or similar.

A few days before we left for camp, TLR found an event: 3 Leg Torso, playing on the rooftop of what used to be a high school but has been transformed into a swanky multi use type of thing with a music venue inside. Fully catered, bar available, view of the fireworks.  And, a wedding was taking place.  A same-sex wedding, which is relevant to our interests as well.

We took a friend, Marie, and her exchange student from Osaka, and we braved the heat.

Did I mention how expensive the tickets were?  They were expensive.  Like, crazy expensive.

We arrive, feeling very much not cool enough for this event in both ways:  it was hot, and we are not the cool kids.

And we head up front to get seats and Marie sidles up to one of the guys and OMG.  Marie knows this guy.  And we start talking to them and they sit down and eat with us and it’s all fangirl up in here.

And because the event was kind of last-minute, and the tickets were so spendy, there weren’t that many people there to see the show.  it was like attending a private show.  It was seriously so much fun, you guys.  It was surreal. 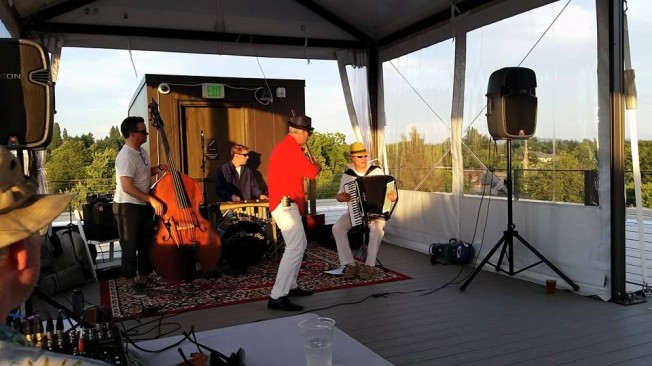 Seven years ago TLR and I shacked up together on the 4th of July.