So my 9 year old giant kid, Delia, and I visited my mother on Friday.  It was a day off of school and I seized the opportunity to drag her down to Mom’s for a sewing lesson.  With a surprise.

I mentioned to Delia that we were going to Grandma’s for a sewing lesson.

“But I already know how to sew,” she said.  Meaning that she could thread a needle and hand-stitch little projects from a kit and had made her own creations once or twice.

“Grandma wants to show you how to sew using a sewing machine,” I told her.  She seemed pleased.

We arrived in due course and Mom showed her around the sewing room and we looked at some projects, mostly quilts.  There was a box wrapped in cupcake-themed gift wrap on the dining room table, which we passed several times but was never mentioned.  Eventually Mom left the room and Delia sidled over to me.

“Mama, there’s that box over there but I don’t want to be rude and ask about it,” she said.

Note: this is a first.  I would not have been even slightly surprised had she dropped broad, obvious hints about wondering who that present could be for.  In fact, I was rather surprised not to hear them.

Eventually Mom returned and in due course asked Delia if she knew the expression, “the elephant in the room.”  She didn’t, so we explained it to her.  “So, what do you think the elephant in this room is?” Mom asked her.

And so it was that she was given the box, and opened it, and inside was a small, neat beginner’s sewing machine. 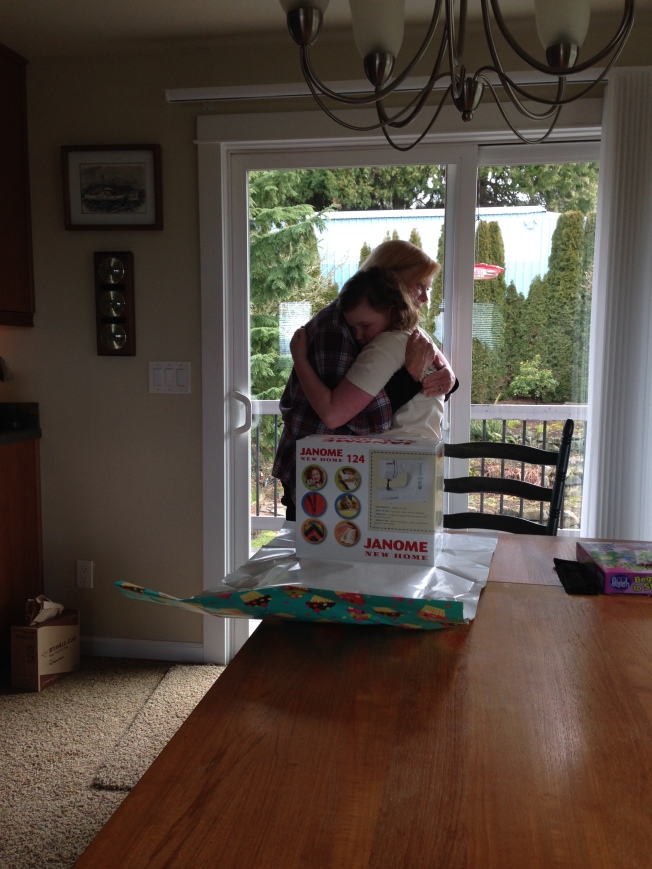 We spent the rest of the afternoon having a basic sewing lesson, learning to load the bobbin and thread the needle and make stitches.  It’s a very nice little machine, easy to use and quite good quality. 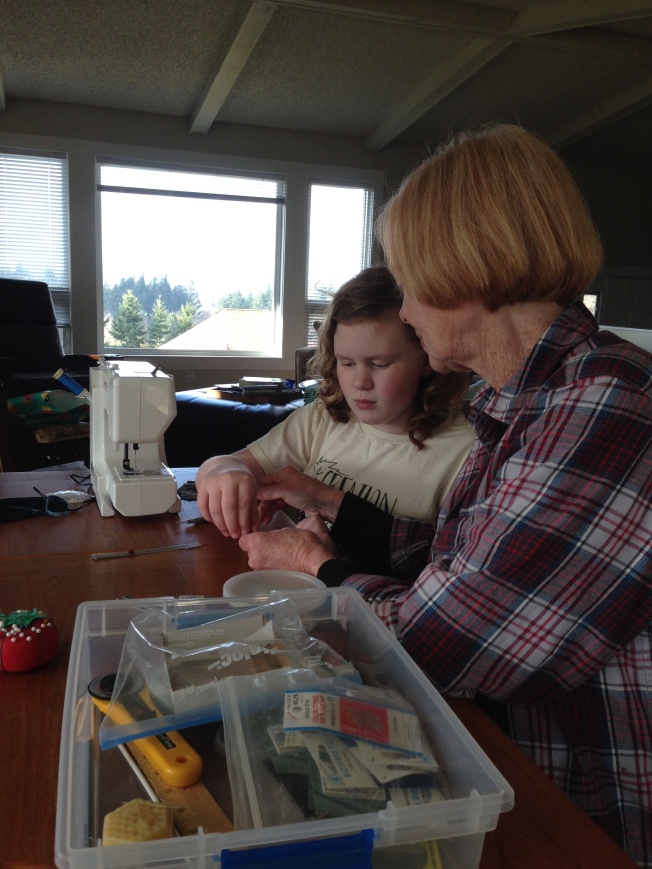 As we packed up to leave Mom permitted us entry into the Inner Sanctum where bits and scraps of this and that were selected from her very tidily maintained Stash.

We returned home rich in material goods (literally) and the next morning found Delia getting into the shower as I dragged myself out of bed.  I commended her on her initiative, and she told me that she figured if she took care of getting ready to go, she might have time for sewing before leaving for the Girl Scout function we had to attend.