So a few years ago I was driving along minding my own business eating a Milk Dud and a cusp broke off one of my six-year molars. Alas, I had no dental insurance, so I had it examined to be sure it wasn’t going to just fall out of my head and then went on my merry way.

Fast forward to the present time. I now have double coverage, making a thousand-dollar crown essentially free of charge. Time to get that thing taken care of. I went in for what I thought was going to be a consult appointment one Friday — “Oh no, you’re getting your crown today!”

So they filled my jaw full of Novocaine and went to town on that thing. And I got a delightful caveman tooth that they mixed up and molded on the spot, as though we were in kindergarten and it was Play-Doh time. “Come back in three weeks,” they told me.

The next day I had a migraine.  Good times.

So it was that this afternoon I settled into the dentist chair and tried not to freak out at the thought that they were going to pop the caveman tooth out and put the new one on WITHOUT ANESTHETIC.

The Lovely Rhonda said it would be no big deal.

The Lovely Rhonda, it turns out, is a lying liar of big fat hairy lies.

They popped the temporary crown off without incident, but then they had to go and poke around at it and clean it off and scrape at it with their ingenious pointy little horrible dental tools.

Then the dentist warned me: “So, uh, this part doesn’t feel too great. But it’s quick and not really worth numbing up half your face, and that also would make it harder to test the fit properly. So, uh, I just like to warn people that it will feel kind of…. icy. And then it warms up and that goes away. So uh, here we go.”

And then she drove a railroad spike of frozen steel into my jawbone for a hundred years.

Okay, it was really really unpleasantly coldly painful for like five solid long horrible seconds and then it throbbed for hours.

Five seconds is like half an hour in a dentist’s chair when someone is doing something unspeakable to your live, defenseless, naked tooth.

Then they told me to avoid eating or drinking cold foods or drinks on that side for a little while. THANKS FOR THAT, HELPFUL HORRIBLE DENTIST PERSON.

Ugh. Time for Motrin and bed.

But, it could be worse. Young Neville goes to the vet to get the big snip tomorrow.

That would probably be worse. Maybe.

Okay, technically she wasn’t from there, but she did live there for a time.

Tonight I had occasion to dig out some little odds and ends that I inherited when my grandmother passed away.  This happened when my daughter was five months old.  She is now 9 and a half years old.

It’s really true that although you may get past someone’s death, you don’t really get over it.  It feels the same today as it did then.  There is not a day that goes by that she does not cross my mind.

I had not brought out these things in some time and at first I could not find them; this caused a small panic, that I could have let them somehow slip away from me.  I rummaged around in all the disused spaces of our house several times before the suggestion that might they be among my craft supplies?  jogged my memory a bit and so I found them, in a pasteboard box, down in the glass-fronted hutch cupboard.  I was relieved that I had not left them in the garage, which is relatively dry but cold in winter and hot in summer and smells like damp concrete and grass clippings.  It would be no place for an old lady’s trinkets.

It’s hard for me to handle these little items, physically I mean to touch them and have them out, because they still smell like her house smelled and that will cause the sharp little pang of stinging sadness like no other thing will.  But I needed something from the little cache, and when I couldn’t find it it suddenly became vitally important that I lay my hands on it, right now, tonight.

I feel better and worse, happier and sadder, for this little trip down memory lane.   These days as I find myself caring less and less for what anyone thinks of me I am reminded of her more and more.  She had her faults and her foibles but by God she was who she was.

And I miss who she was, tonight and every other day of my life.

So this morning we ventured forth into the 22 degree weather to get our annual Christmas tree.  This marks the fifth straight year that we have done so as a family, going to the same tree farm each year.  We like this tree farm because although the trees are somewhat more expensive than the ones at the gas station, they have a petting zoo and free cocoa and they drill a hole in the end of your tree and stick it on a patented “Marriage Saving Tree Stand” so that when you get it home you just stand it up and it’s ready to decorate.

Note: feeding farm animals a handful of oats for 25 cents — thereby transforming a fifteen dollar bag of oats into a veritable gold mine for the farm (note to self: THIS IS WHERE THE MONEY IS EARNED, THE TREES ARE JUST TO LURE YOU IN) is a major draw for the children, but it’s the tree stand that brings The Lovely Rhonda and I back year after expensive year.  No price is too high to pay to get out of having to apply a rickety pot-metal stand to the nether regions of a majestic fir tree, and furthermore get it to stand up straight.   It’s a miserable hobby that nobody enjoys, least of all me, the designated spider-killer, lawn-mower and tree-erector of the household.

Each year we have also had to find our way to the tree farm as though we had never been there before, because we can only remember the vaguest details about it — “it’s the one with the goats, and I think there was a guy in suspenders?” — and certainly can’t be bothered to recall useful information such as, for instance, its name?  Or perhaps general location?

And so it was that we once again this year performed the traditional Festive Annual U-Turn when we realized we were, as with the previous three years, on the right road but going the wrong way.

Within moments of embarking from the Minivan of Justice we found a worthwhile adversary and, as always, I was elected to dispatch the thing.  We dragged its gory remains back to the van:

Then as we drove it up to the barn for shaking and baling, TLR said, Um, guys?  Look out the back window?  What is that?

And there was a llama being walked around the estate, all splay footed and knobbly kneed, and we had to pile out and meet it.

Her name was Shania Twain and we dutifully had a photo op. 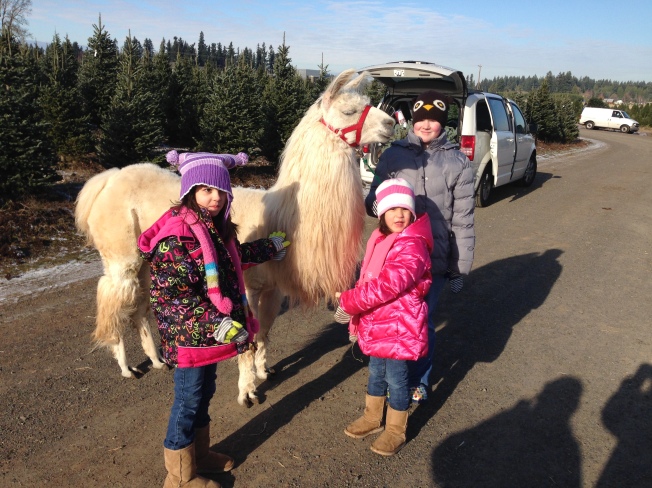 Once we’d exhausted the possibilities of the llama-tree-farm juxtaposition absurdity factor, we crept onwards to the barn.  We allowed the children to ride sans belts, on the floor if desired, and the eldest enjoyed a heretofore unprecedented joyride in the forbidden front seat.  Such is our carefree existence that this relaxation of protocol made them all giddy and unmanageable.

At the tiny guard hut where you pay for your tree, the cashier informed us jubilantly that the car ahead of us had gotten their tree for free.  One of the local credit unions was handing out envelopes with coupons in them for varying amounts off of the purchase price of the trees, and these fortunate holiday shoppers had received a fifty dollar coupon.  Ours was for twenty dollars for which we were pretty stoked, right up until we heard that.  THANKS FOR THE BUZZKILL, CASHIER LADY.

I kid.  The whole thing was pretty magical.  We had no idea they were doing that today and it was a really nice bonus to get the tree for basically one-third off.

We had that sucker shaken, baled and stuffed in to the MOJ in no time and proceeded on, as is customary, to the petting zoo. 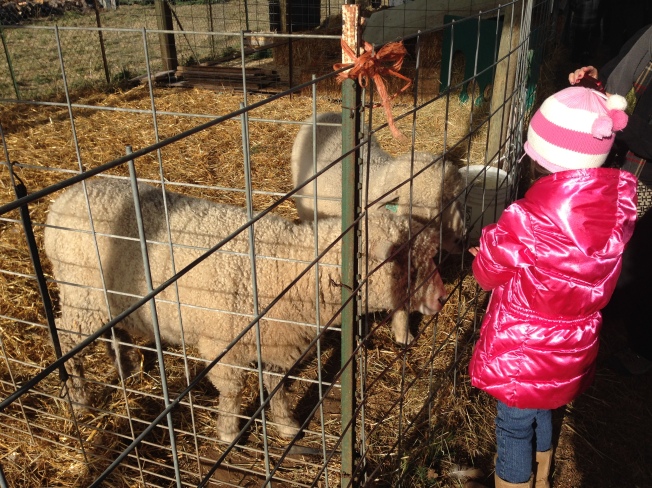 Then we piled into the MOJ and drove our trophy home, to display it in all its grisly splendor until the day after Christmas, at which point I will become physically unable to stand the disruption for ONE. MORE. SECOND. and strip it of ornaments and lights and dump it in the side yard.  The end.