So today it was my turn to take a hit for the team.

Last Christmas the Lovely Rhonda ™ bought tickets for her spawn and herself and her mother to go to a Disney show of some kind, while I got tickets to Walking With Dinosaurs for myself and the redheaded stepchild.  Grandma couldn’t go so Elder Spawn got her ticket, meaning that Rhonda got to herd three recalcitrant children (ages at the time 5, 4, and 2) through a large stadium.

Well, what goes around comes around.  Disney on Ice was coming, and (because I am evidently masochistic at heart) when I saw a flyer at the grocery store for a “family four-pack” of tickets for cheap, I dutifully brought it home.  Great, says Rhonda.  You guys have fun with that.

So today she dropped us off at the stadium and took her library book to the coffee shop for a blissful quiet child-free couple of hours.

Now, I’m not saying that she is not deserving of the pampering.  After all, my new schedule means that I have every other Sunday (and half of Saturday, it must be confessed) completely alone, devoid of hangers-on, free to sit around in my underwear eating Hot Pockets and swilling Mt. Dew while I game the day away affording me plenty of time to catch up on the housework and such.  So it seemed only fair to allow her to sleep late in the apparently well-insulated (read: nearly soundproof) new bedroom and then let her skip off to enjoy herself while I sweatily goaded giddy, overstimulated children through frenetic crowds of souvenir-wielding tots.

Yes, it seemed fair. Even if felt so grossly UNfair.  Grumble grumble.

And then the lights went down, and the colored spotlights came on, and hideously be-costumed ice skaters flitted out into the center of the rink to lip-sync badly to a canned soundtrack, and the children were transfixed.  And before I knew it the show was over and we were on our way home.  And they had fun, and it wasn’t horrible.

But tomorrow I am SO sleeping in.

Last August we had a dirty garage, a smelly damp shed, an overgrown yard, and a dream.

And somewhat less money and time than we anticipated needing. 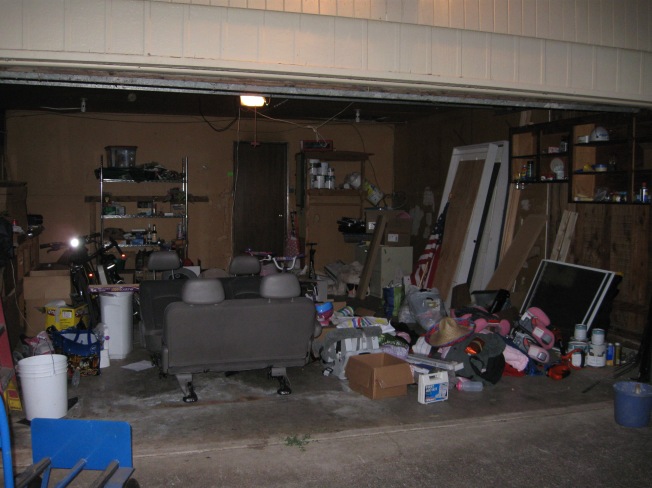 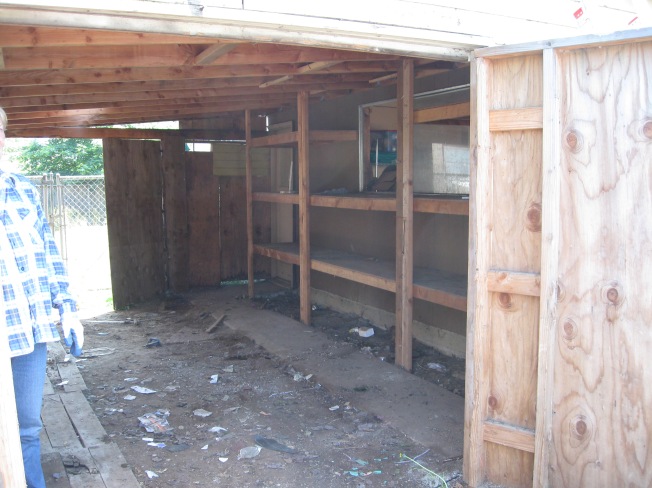 But we pressed on, and soon the shed was gone, the yard was clean, and the walls began to go up.  Before we knew it (0kay, six weeks later), there was sheetrock and a new window and all kinds of good things. 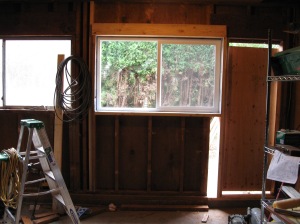 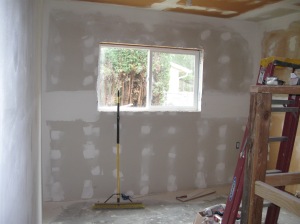 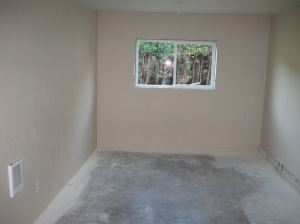 And then the rug guy came and wrestled the rug into submission, and suddenly we had trim and light fixtures and things, and yesterday Kenny put up the curtain rod and helped me haul the bed in there so I could surprise Rhonda with the nearly-complete new bedroom that has suddenly winked into existence.

All that remains to be done is a light fixture, some temporary siding for the exterior, and other fiddling details.

It’s so peaceful in there with just the bed that we’re not in that big  hurry to move much else in.  Well, that’s the excuse we’re using.  The reality is that we’re busy people, working and dealing with kid things and holidays, and the old bedroom is a depressing heap of shoes and laundry and dressers covered in whatever that junk is that dressers collect.

But someday soon, we’ll get it all straightened out. 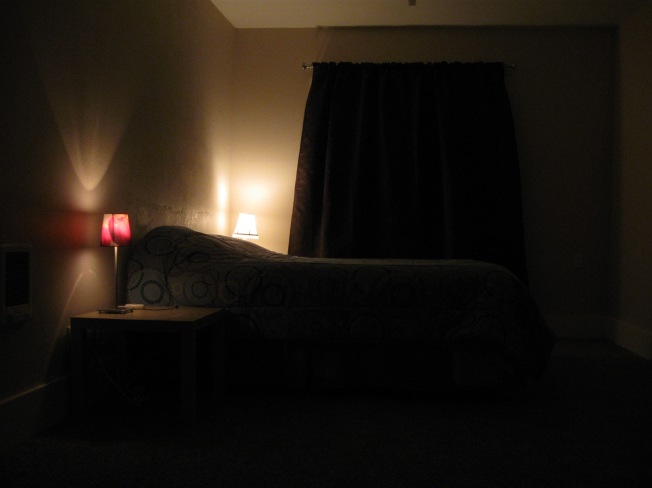 Now, you know I love the children.  I do.  I love them when they are quiet, freshly laundered or whatever it is you do to children to get them clean, and in someone else’s living room, a good half-hour’s car ride away from my own peaceful sanctuary.

Oh wait.  That was in my other life.  The one before I had no actual child of my own and certainly WAY before I inherited two more.

Now, of course, there are children in my house at least half the time.   They are not so much quiet, unless sleeping or perhaps ill, although illness more than likely causes more noise than less, i.e. “Mama I don’t feel so goBLEARRRRRRRRGHARGLEARGHHHHHHH.”   There is also the peculiar state they enter wherein instead of becoming more winsome, and therefore perhaps more likely to be lovingly attended to whilst sick, they enter an antithetical condition of being whiny and horrible when ill, causing Mama to have the occasional brief fantasy involving duct tape, or open windows on fast moving trains.

At any rate, we’ve entered the Elementary School Age Epoch, and having done so we are now undergoing initiation into School Fundraising.  At least once every two weeks we are obligated to fend off various opportunities to contribute.  It’s getting to the point where I am considering sidling up to the teacher (or the custodian or Fat Tony or whoever) out in the school parking lot one late afternoon and offering a fat check just for the privilege of NOT receiving the various appeals for funds.

Actually given the chance I would just write a check and have it done, but that’s another blog entry, and not one that lends itself to humorous lampooning.

Tonight we were obligated to attend the school’s fall carnival.  This is an organized activity, staffed by volunteers (bless their hearts!) and teachers and other school employees, wherein children of various ages may play games and go in bouncy houses and eat cotton candy and hot dogs late at night.  Note that the bouncy houses come BEFORE the snacks, at least if you’re thinking ahead anyway.

Naturally, our particular spawn (ages 6, 5, and 3) declined to eat their dinners in anything resembling a timely fashion, so we didn’t have a lot of time to spend there before night would fall and madness would descend upon them, yea verily, owing to lateness of hour and tiredness of spawn.  So we arrived fashionably late and didn’t stay too long.  An hour, perhaps.

The longest, sweatiest, most overstimulating hour of our entire week, perhaps of our lives.  But I digress.

This carnival was quite successful, being both inexpensive and close by, and I swear they had busloads of specially imported children from neighboring towns brought in, on buses that served espresso and amphetamines.  There is no way that normal children can sustain this kind of frenetic activity and subsequent decibel level for that long as a matter of course.

Unfortunately the success of the thing led to its very downfall, at least so far as our Family Unit went.  The kids didn’t get to play that many games because the lines were so long and the noise and heat were so crazy-making.  But they did get to do the slide and the bouncy-house, and they got balloons, and there were small prizes, and I think they had fun.

But I still maintain that if they wanted this to raise some serious funds, they’d rent out teenagers to watch the kids and put a convenient beer garden nearby.

Today as we were driving home from some errands we came upon a traffic snarl and at the center of it, a young kid laying prone on the left hand shoulder of the road, motorcycle helmet next to him, people on the roadway around him slowing traffic and peering around for help to arrive.

Naturally we could not pass by, for we are nurses, and busybodies, and no help had arrived as yet beyond the passers-by.  Someone had propped the young man’s feet up under a rolled-up blanket or something.  His shoes were fifty feet back on the left shoulder, his motorcycle a hundred feet or more ahead in the brush off the right shoulder, completely out of sight.  The lovely Rhonda checked his airway — he was conscious, speaking, saying his legs hurt.  No wonder.  His left ankle was badly broken and deformed, and his right pantleg shredded from the knee down, the knee badly broken as well.

No one’s legs should ever look that way.  This kid’s life has changed forever.

Presently a police car arrives and the cop pulls on gloves, chides the young man: Well that’s what you get for going so fast. We’ve been trying to stop you since Stapleton Road.  To us:  He was in the triple digits passing us.  We were told he had some other guys on bikes with him but they had sped off when he bit it.

A moment later the ambulance arrives, and they begin to treat the young man.  At this point we moved along.

Yes, he asked for it, hotrodding like that on what was most likely a crotchrocket type bike.  But I doubt he really realized what could happen to him.

The cats are in the house more often, suddenly, and one of them insists on laying across my forearms on the table as I sit at my computer.

There is a certain amount of rain falling, and the leaves are slowly turning, and a person’s mind turns to putting all the yard stuff away and taking down the hoses and putting those styrofoam doo-dads over the taps.  (We always called them Dolly Partons, but perhaps that’s too suggestive for today’s blog audience.  Well, too bad, read someone else’s blog!)

Tomorrow morning I begin a new phase wherein I work Monday through Friday like much of the rest of the civilized world.  It happens that this job is like, grown-up and stuff, and there will be meetings and things, and the main thing is that it does NOT involve working nights or weekends.  And I like that.  A lot.

And I suppose that since this is happening when the rain begins and the leaves fall, it feels a bit like when school starts.  It feels familiar and comfortable.

Orientation is tomorrow, and there will be many papers to sign (in which I agree not to blab my clients’ business, unless it is to protect them, and only then to the appropriate authorities, and also that I Will Not Use Social Media Inappropriately, and that I understand that I can be fired if I screw up enough times, and so forth), and long boring trainings to sit through regarding same.  It’s the same the working world over, lest ye think I am making my new/old/once and familiar employer out to be more tedious than any other: ye be mistaken, it is no more or less tedious than any agency of a few thousand people.  Corporate culture be damned!

And now to finish with dinner, if I can pry this cat off of me.  Another reason to love fall.